Tour Code: BTG-BLT-152
Tour Type: Private Tour Guide + Private Vehicle
Starting Date: Every day
Detailed Itinerary:
Day 1 Entry Beijing
However when you arrive in Beijing, our English-speaking tour guide and driver will meet you at the airport exit in time and transfer to hotel. The rest of the day is freetime.

Day 2 Beijing (L)
This morning, you will see the Tiananmen Square which is located at the center of Beijing City. A lot of people will come because of the respect for the fame. At there, you can see lots of famous building such as Tiananmen Tower, Monument to the People’s Heroes. Nearby the square we can take about 10 minutes walk to the Forbidden City. It almost five centuries and served as the home of the Emperor and his household, as well as the ceremonial and political centre of Chinese government. After lunch, we drive to the Summer Palace–the largest and best-preserved imperial garden existing. It is a vast ensemble of lakes, gardens and palaces. In ancient time, it is for the emperor and concubines to play. Last, your car and tour guide will transfer you back to hotel.

Day 3 Beijing (L)
We will spend this morning to the Mutianyu Great Wall which surrounded with mountains and beautiful scenery, and also less crowed than other great wall sections. The next destination, we are going to the Ming Tombs which is a group of mausoleums of the Chinese emperors from 15th to 17th century. Exterior visit Bird’s Nest and Water Cube (About Bird’s Nest and Water Cube, we are not visit indoor). All of these are landmarks buildings on the 2008 Olympic Games. These attracted many visitors for the great architectural interest. After a full day tour, transfer you back to hotel.

Day 4 Depart Beijing
In the morning, our guide will pick you up from the hotel and drive you to the Temple of Heaven where the Chinese emperors held grand sacrificing ceremonies to heaven. The buildings and the parklands reflect ancient Chinese religious beliefs. It was identified as “world cultural heritage” in 1998. After that, we will take you to the airport for departure. 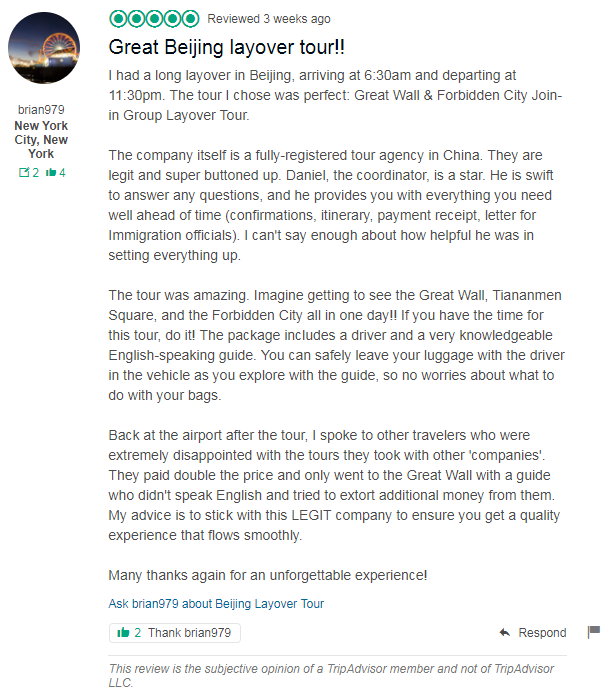 Got a question? Ask us here. We will reply to you within 6 hours (normally within 1 hour). Cancel reply

We already reported to related departments.

Please note that our company and payment account name is Beijing Explore Tours CO., LTD and our URL is www.beijinglayovertour.com.

We are the only qualified tour company can sell tours at Beijing Capital Airport. Find our counter, please click here.

Our Advantages
Recommended on TripAdvisor
Not sure you have enough time? Check our previous clients’ time frame on Twitter
Tweets by BeijingLayover